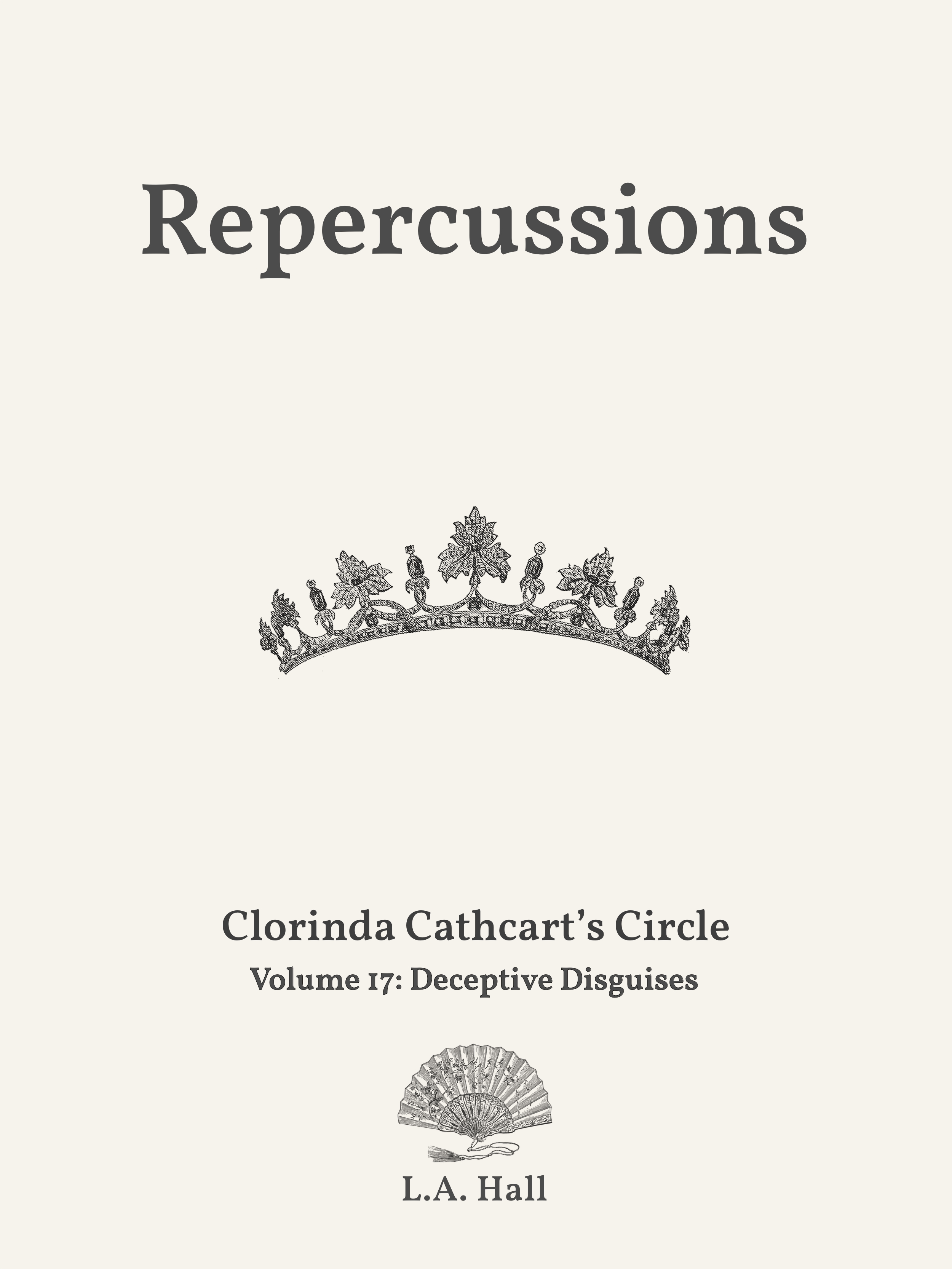 While certain matters have come about to be improved, there are troubles still remaining. Lilian Lotting is safe, but her cruel husband waxes vengeful. There is further evidence of the extent of Rathe’s devious plots, that extend further than previously supposed. While Clorinda, Lady Bexbury, does not lay down the task of contrivance, she becomes a little jaded, and is pleased to see others acquiring this art. Her beloved Leda undertakes a daring plan.

You might like to read the Chronology & Reading Order for these books & also the notes for this book: Repercussions: Allusions and References. Or view all books in the Clorinda Cathcart's Circle series.

The room was warm

There were ever a deal of Christmas invitations! But sure, was so widely supposed that that would be the case, that no-one would take a pet did the exquisite Dowager Lady Bexbury give a regretful smile and declare that nothing would have given her greater pleasure than to pass the Yuletide season at Qualling — Tetterdene — Monks Garrowby — Ammerpark — Dambert Chase — &C, but she had already accepted hospitality. ’Twould be quite the most unmannerly thing to cut. And there would be an answering smile and the suggestion that la, one should be very beforehand indeed in making the invitation.

Of course, it was very pretty that her friends did not forget her, and perchance even took the thought that she might find herself a little desolate at this season, now that her dear friends — were they not, in fact, some relation? — Sir Josiah and Lady Ferraby, were deceased, and so was that other great friend, of whom it had ever been rumoured that their feelings were a deal warmer than friendship, Gervase Reveley, Viscount Raxdell, cut off in his prime in a driving accident in his curricle, using his skills to save greater harm to others involved?

Why, indeed she greatly missed her darlings, and her dear Milord, even did the world not apprehend the true inwardness of the way things had been.

But indeed, she did not pine and wear the willow and with the passage of some years, why, things began to come about to new interests and loves that she had never anticipated.

There had always been the dear Ferraby children — not just her own beloved wombatt child Flora, born here at Yeomans in the county of Surrey when Clorinda had been a very noted courtesan, before her most unexpected marriage to the ailing Marquess of Bexbury, and given to her dearest darlings to be brought up in the respectable household of a wealthy industrialist. No, she had come to love ’em all, and here, joining their party this year, was her favourite, Josh, that from a shy boy that observed the hedgehogs in the garden had become a famous zoologist and explorer.

Beloved Flora: her fierce warrior daughter. Sure she had never anticipated such an Amazon when she had first looked upon that perfect, very tiny babe that had caused her such an ordeal. A small, charming, golden-haired, pink-cheeked Amazon, that one would not on first encounter suspect of holding such fiery opinions.

Leaning over Flora’s chair, her dear companion and ever-fixed mark, Hannah Roberts. Some people, no doubt, imagined that quiet Hannah was Flora’s shadow — but ever since nursery days Hannah had had determination allied to extraordinary intelligence, and even though younger than Flora and the dusky daughter of servants, had never let her ride roughshod over her. No, Hannah, now a successful writer in the periodical press, her essays collected into volumes, was remarkable, admirable.

Dearest friend, her bello scozzese, Sandy MacDonald, the one most desperately bereaved by Milord’s death. But now — not merely finding new interest in the cultivation of young minds at the godless institution in Gower Street and the college for women in Bedford Square, but discovering that he could love again and have many of his notions shook up as he did. And also, through the application of science rather than the more usual procedure, become a father to Hannah’s daughter Miranda, that at present perched on his lap and engaged in — Clorinda smiled inwardly — philosophical convocation.

That excellent dear creature, Mildred Veriker, the honorary granddam of the Yeomans orphans and the pillar of the household, and a botanist of note, corresponding with savants and visited by ’em. It was gratifying that one had been able to relieve the difficulties of her widowhood — Veriker had been in many ways a very fine husband, had entirely appreciated his wife’s intellectual capacities, but had been sadly lacking in managing his financial affairs — by suggesting that two young women setting up a household somewhat like unto that in the novel Millenium Hall would be prudent to have some older lady in the establishment.

Sweet Ellen, the governess, and her husband, Gordon Marshall, were absent, spending the holiday with Gordon’s family, very proper, and taking their baby daughter Lina — Caroline — with ’em. But after consideration, had determined that Ellen’s son Theo would be happier with his accustomed companions. Was yet a little young to enjoy being took out into company with comparative strangers.

So there was Theo, joining in the game with his great heroes and as ’twere elder brothers, Johnny and Jamie, that Josh was conducting ’em through — some matter of their toy soldiers becoming explorers, is that not a finer occupation than battle? about the parlour, and little Madame Beatrice quite insisting on taking part —

O, one could not say, infants of such early years, la, she is such a tomboy! But Clorinda fancied that the signs pointed in that direction, even when, on other occasions, Milord’s lovely small daughter was capable of playing the juvenile coquette.

But indeed, it was delightful to see Nardo di Serrante taking part! Sure he seemed to be pulling round from that devastation of the spirit his experiences in the Two Sicilies in ’48 had caused. Was even talking of returning in more sober spirit to work for the Risorgimento under guise of a Yankee businessman interested in promoting native cultivation of wine-grapes. Had been attending Quaker Meeting with dear Verrie — for on his mother’s side Nardo was of a long lineage of Massachusetts Friends and brought up in that practice —

Although somewhat to the surprize of all, when Jamie had shown very ardent to attend Midnight Mass — for he continued to receive instruction from Father Flaherty, the nearest Romish priest, as his father Jimmie O’Callaghan had desired, afore leaving for America to rouse interest for the cause of Ireland — Nardo had revealed that had been in the habit of doing so. ’Twas in the nature of a family tradition, he confessed, his Papi no longer considered himself a son of the Church but still went on this one annual occasion, as he had done with his zia.

That was a thing Clorinda had not known about Maria-Bianca, Contessa di Serrante! Had always felt her like unto herself, an acolyte of Aphrodite, Venus’ votary even might one not find, these days, temples wherein to worship.  But indeed, did she not, herself, attend church in correct fashion? ’Twas the mannerly thing to do. And these days, there was no matter of the vicar of parish drawing himself up at the sight of the notorious Madame Clorinda in one of the pews and thundering texts concerning Scarlet Women &C. No, she was the bosom-friend of bishops, that were delighted to appear as patrons of her philanthropies.

The parlour door began to open, and came in that lovely child, Hari, Josh’s son by Julia Humpleforth, that displayed, more than Julia herself, that was very fair-skinned, her Hindu ancestry, followed closely by Betty Higgins, ruler of the Yeomans nursery.

She looked down at Hari with a fondness she did not quite conceal as she said, here is Master Hari considers himself a great boy that does not need to have his hand held when going down stairs! That is why we are a little behindhand here.

Kate, observing that he was about to run through the middle of the game, came over and said, let us go this way to sit with Verrie by the fire. Such a good thoughtful girl.

Here was Betty looking a deal happier — there had been a time only a few months ago when she had had a pinched look about her mouth over the situation of her daughter. That had been brought up by her married sister, but Betty had always been in the capacity of an affectionate aunt towards her. Had been very much perturbed to find her husband a cruel scoundrel.

But they had contrived to covertly convey Lilian Lotting far away and into a place of safety where she might support herself through her trade as milliner.

And there, watching the scene with entire delight, was Clorinda’s own unexpected best-beloved, Leda Hacker, that had used to be Bet Bloggs, thief and whore of Seven Dials, and now employed in dear Matt Johnson’s investigation agency. Sitting for once with entirely idle hands. She looked up from her observation of the game in progress and smiled at Clorinda.

Sure, ’twas a time of life when she found herself entirely given to sudden hot flushes, Clorinda thought, fanning herself, and the room was warm.