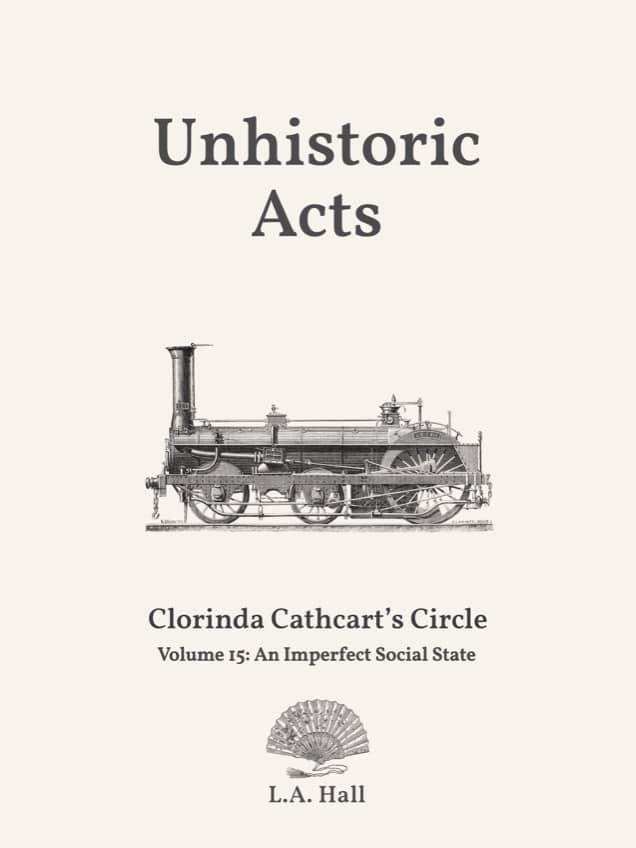 Europe and the world are troubled by revolution and counter-revolution. Cholera is rumoured to be moving westwards once more. Clorinda and her circle are largely taken up with their personal concerns, but nonetheless, in their small ways, diffuse a little benevolence and kindness.

You might like to read the Chronology & Reading Order for these books & also the notes for this book: Unhistoric Acts: Allusions and References. Or view all books in the Clorinda Cathcart's Circle series.

Come as ’twere a very long journey this past year

Leda looked about her room. That would be kept for her over the summer, at a reduced rent, for she would not be taking meals, or needing laundry &C, and sure, she was not the only one of Mrs Mitchell’s lodgers that would be spending some time out of Town over the summer, though most of ’em might only spare a week or a fortnight or so. Whereas Leda was going to be jaunting about the country in the capacity of secretary-companion to Lady Bexbury as she made her round of country-house visits.

Leda nibbled on her lower lip — la, Sophy would scold did she see her do the like! She, that had been bold brazen Bet Bloggs of Seven Dials, thief and whore, was not one that would admit to being daunted by very much: had she not come about to defy Nat Barron himself and was she not now upon terms of amiability with him? But indeed, the prospect before her was one that had her quailing a little.

Sure, she had been the lover of Clorinda, the exquisite Lady Bexbury, these several months now, but that was a different matter, she confided, from entering those circles of the Quality in which her darling, she knew, moved with such aplomb. Did one not read in the papers of the quite exalted company in which she was received?

When she had first been conveyed to Yeomans, that pretty mansion in Surrey, by Molly Maurice, in her impetuous flight from Nat Barron’s intention of marrying her, she had thought it quite the fairytale palace from a pantomime! She came about to understand that ’twas, as these things went, quite a modest gentleman’s residence, though she also came about to think that it was a fairytale castle in other ways. The home for Flora Ferraby and Hannah Roberts’ garden of orphans, that Leda began to deduce were not entirely orphaned. A lovely haven for sweet Ellen and her little boy Theo, and for darling Verrie, Mrs Veriker, that was both a lady that gentlemen of science would make the journey into Surrey to discourse with of botany, and the beloved honorary granddam of the children. Wondrous out of the common — one is reminded, Verrie would remark, of that tale Millenium Hall.

No, Yeomans was no pattern for what she might encounter, and she was in sore fear that she would do something to disgrace herself and embarrass Clorinda.

La, her darling had said when Leda had opened something of these concerns to her, it is give out that you are some relative of my late dear friend Mr Hacker, that his family, that were in but modest circumstance, did not wish to know when his name was being mentioned at the time of the scandals over bodysnatching and resurrection men. ’Twill explain any awkwardness.

But Leda was not entirely reassured. Had not disclosed to her darling how terrified she had been when Miss Addington had so kindly impromptu invited her to the reception at Mulcaster House, after they had called upon her in her dressing-room. Sure Mulcaster House had been very unlike Clorinda’s pretty charming house in Mayfair. Entirely like unto somewhat one might read of in the penny parts! — a glittering throng moving up the vast stairway — her legs had trembled, she had wished she might clutch Clorinda’s hand —

She had been a little relieved to observe that the Raxdell party had looked a little awestruck themselves, even Mr Peter Reveley.

But, law, Lady Jane was awe-inspiring! Oh, all that was gracious, no doubt —

Leda had been very glad to retreat to the retiring-room, and only wished she might linger there. But no, she must go out, and be introduced around by Clorinda —

But she could not sit here and brood! She must be about moving, and indeed, there was a rap on the door, and la, ’twas Celeste Mitchell herself, saying had been detaining Nick Jupp in cozy gossip this while, sure Miss Hacker must have been wondering what had come to him!

Leda smiled, and put on her hat, and picked up her valise, and said, was very good of Mrs Mitchell to hold the room for her while she was away such a while, and the reply was that sure, lodgers coming in for a few days or weeks at a time was more trouble than one wanted, ’tis not the like of Miss Martell going visit her family, and her married sister coming stay the while in her place so that she may go visit the shops.

And, she added, gave ’em a chance to do a good turn-out.

Leda tripped down the stairs, and greeted Nick Jupp, that was standing in the hallway with his hat in his hand, and said was sorry to have kept him waiting.

He had brought the gig — sure, one did not particularly want to cause comment and gossip among the neighbours: did you see that fine carriage with a crest upon it, drawn up outside Mrs Mitchell’s? She hopped up into it, and tucked the valise under her feet. Asked after his family and the household in general, but did not wish to distract him once they left the quieter streets and got into the bustling traffic.

But in spite of the press of vehicles they were soon enough coming into the mews, that was ever exceedingly well-kept — nothing in the least slovenly about Jupp’s livery stables! — an idler or so on the benches outside the Buffle Arms, but no inebriates — and into the yard of Clorinda’s house.

She climbed down from the gig, and took her valise, thanked Nick and conveyed him a suitable compliment, then went into the house. Euphemia popped out of the kitchen to greet her, waving floury hands, and saying would send up a nice cooling sherbet — sure this was sticky weather — as soon as might be.

Leda went upstairs with somewhat less than her usual alacrity, nodded to Hector that was a-sitting in the hall ready to inform callers that Her Ladyship was Not At Home and to receive cards — but surely there would be few callers at this time of year? — and went into the parlour. So exquisite — and so safe. She fancied that she was not the only one that had found it a place of refuge, somewhere that she might disclose secrets and know that they would be held as secure as anything in those well-concealed secret compartments in Clorinda’s desk.

The lovely Lady Bexbury was seated at that desk, that was a little incongruous in that place — oh, a fine piece of workmanship, excellent inlay &C, but one might see that it was a working desk, for a lady that had a deal of philanthropic matters upon hand and did not disdain to take an active interest in her business affairs. And, known only to certain intimate friends, where she wrote those tales under the style of A Lady Anonyma and plays the authorship of which was much debated and gossiped upon.

She looked up at Leda’s entrance and smiled. La, my dear one! I have just put my very horrid sister-in-law Mrs Fraylingham into my tale as the keeper of a bawdy house and receiver of stolen goods —

Anxious and fretted as she was, Leda was still surprized into a spurt of laughter. Your sister-in-law?

La, has resented me and refused to know me ever since my marriage, apart from writing me a most incivil begging letter when my poor dear husband was scarcely cold, indeed I fancy the cortege was still on its journey to the family mausoleum. Sure of all the Dabney connexion she is entirely the worst, though ’tis a hard matter to adjudicate. I will, I think, however, give her the crown for her very vile behaviour towards a governess in time past —

Clorinda rose and came over to kiss Leda. She scrutinized her with some care and said, la, what a sad face! is there somewhat troubles my darling?

Leda sighed as she removed her hat and went plump herself down upon the sopha. O, you will think me a sorry fool — but I am in the greatest terror of this enterprize.

Clorinda came sit down next to her. There was a brief pause as Hector came in with goblets of sherbet, and a plate of cucumber sandwiches. Then Clorinda took both of Leda’s hands in her own and said, sure ’tis not to be wondered at, do I come to consider upon it.

She was silent for a moment. My love, you have come as ’twere a very long journey this past year and had many changes, and now I go expect you to be blithesome about yet more —

She lowered her eyes for a moment, and went on, O, I found it sore tiresome to have to observe all the formalities of aristocratic mourning after the death of the dear marquess — for you will apprehend, had been a business-like arrangement and we had known one another a very short time, so there was no question of being a grieving widow — so very unlike my previous life. And yet, do I come to think upon it, it gave me time to get used to my different station. I had the great advantage of being took up not only by Susannah Wallace, that had already been covertly a friend, but also by Lady Jane, that was known exceeding severe and exacting, and introduced me about the philanthropic set, and presented me at Court, &C.

At the time, I supposed, la, ’twill give Society time to forget Madame Clorinda by the time the Marchioness of Bexbury may go about once more. But I fancy ’twas also advantageous to me, to get used to the change rather than being bounced into an entirely new life.

And now, I go bounce you into this, because, she lifted her eyes to Leda’s, I felt quite desolate at being parted from you for the duration of the summer. But do you dislike the prospect, why, I may find some reason — Matt Johnson has some commission that only you might undertake? — why you do not accompany me.

Leda took a deep breath. Gulped, and said, Clorinda, I should be desolate myself not to see you for the whole of the summer.

Truly, my darling, I do not think it will be as bad as you fear. She leant forward and kissed Leda. They were both a little tearful.