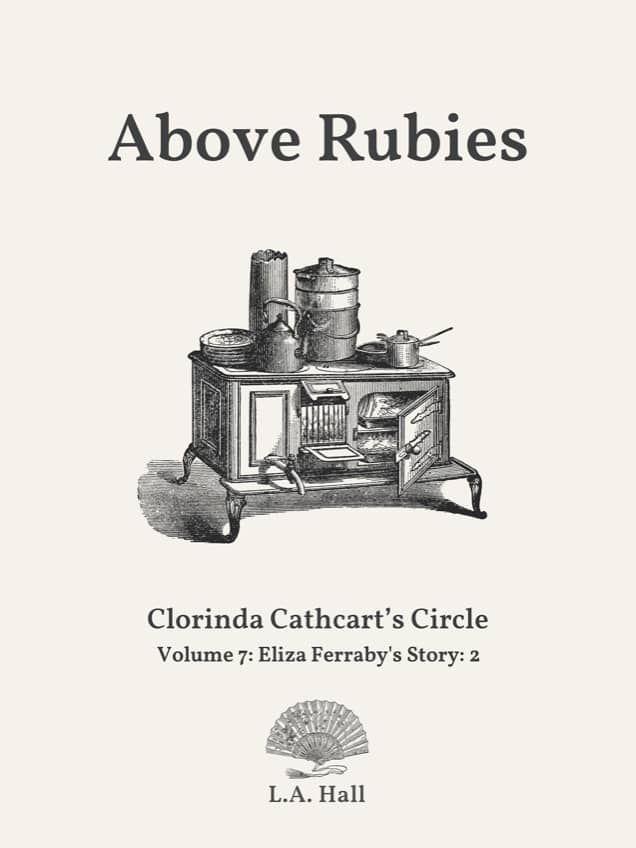 Despite Eliza and Josiah’s anxieties that she might not, Clorinda returns from visiting her late husband’s property in Naples. She remains the Ferrabys’ beloved third: but now she is out of mourning, as Dowager Lady Bexbury is moving much more widely in Society. The Ferrabys themselves find that their own circles continue to widen, while a new challenge appears on the horizon: with the business doing so well, and civic improvements being more generally taken up, Josiah Ferraby is giving serious consideration to suggestions that he should stand for Parliament. Eliza finds this prospect daunting, especially as it would involve a move to London. But their contriving darling Clorinda has the matter in hand…

You might like to read the Chronology & Reading Order for these books & also the notes for this book: Above Rubies: Allusions and References. Or view all books in the Clorinda Cathcart's Circle series.

Buy or Borrow Above Rubies

Reasons to Travel to Town

Eliza Ferraby was about looking over various matters to do with the business of the ironworks, with Bess at her side, for ’twas most excellent instructive for Bess to get a notion of these things, when Josiah came into the family room, with an expression that led Eliza to tell Bess to run along to the schoolroom. Although Bess pouted a little and let out a groan, she got up and did so without any further protest. Once she had gone, Josiah held out the letter in his hand. ’Tis from Sir Barton, he said. Lady Wallace is, I fancy, in a poorly way — well enough in body, risen from lying-in, has a healthy daughter, but exceeding low in spirits and unlike herself. The poor fellow sounds quite distracted —

One cannot wonder, said Eliza a little tartly, if that crocodile of a mother of his goes haunt the house as I daresay she does, but I suppose he cannot go pack her off to Bath or Leamington Priors will-she nil-she, alas.

But what he comes about to ask, is whether I might spare you, my love, to go and keep her company a little and mayhap raise her spirits somewhat —

Why, had he not asked, I should have been greatly minded to offer! Eliza took the letter from his hand so that she might peruse it. O, she said, indeed this sounds most unlike the Susannah Wallace we knew — will sit staring at nothing, weep somewhat, show a little fretful over the babe but take no interest in anything — sigh — does not read — o, Jos’, sure one hears of such cases, that the passing melancholy fits after childbed may be prolonged — sure I hope ’tis not such a case as one hears of where a lady becomes one may only say entire lunatic through the disturbance of the humours —

Would be entire proper in you to go keep her company, said Josiah. And I mind that there may be other reasons why you might wish go to Town — sure I cannot get away myself — but now we are assured that our darling is upon her return —

There was indeed that consideration, although Eliza felt little pangs of worry as to whether their darling would return and still be their own hearts’ darling Clorinda.

Certainly there had been distractions to their minds over these months, but they had not entirely served to keep Eliza and Josiah Ferraby from fretting over their beloved Clorinda, widowed Marchioness of Bexbury, so distant, exposed to who knew what perils on the journey and at Naples? O, she was surely well guarded: loyal Hector with her, Lord Raxdell that was known so adept with sword and pistol at her side, that Italian assassin that had been her late husband the Marquess’s man in their party. It was foolish —

Then her letters had brought additional cause of worry.

Sure she sees a deal of Society! exclaimed Eliza, ’tis quite the whirl.

One cannot wonder at it, responded Josiah, lighting his pipe. One must suppose her late husband was much received and had a deal of acquaintance in those parts, even did she not have those merits that must recommend her in any circles she adorns.

O, quite, agreed Eliza. But somehow, could not bring herself to speak of the fearfulness she felt, not so much at Clorinda’s accounts of the pressing attentions and furious jealousies of the fellows she encountered, but the admiration she expressed for the Contessa di Serrante — what a very fine woman she is —

Of course, she went on, we should not in the least object did she amuze herself a little, can she not be with us —

There had been somewhat of a whirl about them, as well: quite aside from the visits they made to various acquaintance, as more houses were completed in the agreeable location above the town and out of the smoke where they had had their own house built, families began to move in, and there were house-warmings, and visitings to and fro, and tea-parties, and invitations to dine.

There had been the matter of Flora being entirely weaned, and Minnie conceding to the courtship of her pastrycook suitor, had fallen out very pleasing.  They had took a shop in a good part of town and business throve exceedingly, and one might see Minnie most contented tending to customers. And while their own household was in no great need to buy in cakes and pastries, Eliza considered it a kindness to patronize the shop, and go recommend it about her circle.

They were even bidden to dine at Nackerley by the Grantons, most exceeding gratifying.  ’Twas not just very pleasing recognition by the county of a prosperous industrialist, but, they discovered, Mrs Granton had significant connexions to the Whig interest, and there was, they fancied, somewhat of a sounding out of whether Josiah might have parliamentary ambitions. But, he said, as they talked it over in bed later, ’twould be patronage, I confide, would come with a price was there some matter of a cozy pocket borough that they go look for a member to fill.

Indeed, my love, one would not wish to run headlong into the business, but can be no harm in manifesting a certain civil interest.

Eliza had found that, somehow, she felt more of a confidence in local society, and fancied that perchance she owed that to their darling, that had pointed out to her that, aside from that reptile set that took a resentment against her as a farmer’s daughter that got above herself, she was considerable admired, and that there were younger women looked to her as a model. Sure, here was Hepzibiah Bramdon, that now had a fine bouncing infant son named Horace, and had come move into a fine house up here, not only took Eliza as a guide but had formed a fine friendship with Miss Netherne.

For it had come about while the Ferrabys were about visiting the young Gartslades in Cumbria, that Mrs Bramdon had writ a note to Miss Netherne asking very civil might she pick out some volumes for her at the circulating library while she was still unable to leave the house? That had led to conversation — Hepzibiah had met Lavinia Abbott while she was visiting her brother, had heard her speak of Lucy Netherne as a young woman of learning and apprehension —

This all fell out very pleasing.

’Twas also pleasing, they had found, visiting the Hammersleys, to see how different the vicar’s wife showed away from the vicar and in the company of her son-in-law, that was as inclined to indulge her as he was his wife. Though, said Eliza with a little sigh, I am given a little concern by Mrs Hammersley’s looks — there was a puffiness I could not like. But mayhap ’tis just that I worry that she is somewhat old for a first bearing.

But, alas, Eliza’s concern had proved prescient, and Mrs Hammersley expired in childbed, leaving a distraught young husband and a motherless son. But, said Eliza, at least the vicar’s wife considers it entire her Christian duty to remain with her son-in-law in his grief and to look after the poor orphaned infant. ’Twould be exceeding improper in the vicar to object to such a course.

Josiah sighed and said that while he quite saw the advantages for the vicar’s wife, it put the vicar into the most exceeding ill-humour and he was even more difficult to deal with than his wont.

Eliza rolled her eyes. My dear, do you not think the poor vicar has been looking tired and out of health of late? Do you not think some of the better-off parishioners might put together a fund to send him to — I hear Buxton is a very sanitive spaw? — for a little while, leaving the parish in the hands of Mr Piper, this latest curate, that seems an agreeable young fellow that shows a considerable sympathy towards improvements?

Josiah took the pipe out of his mouth. My love, that is a stratagem quite like unto our darling’s! I will begin put it about that ’twould be a charitable thing. Also ’twould be a diplomatic thing to have him out of the way, I think ’twill be conceded.

Had all fallen out exceeding well: the vicar had spoke of his ambitions to complete the commentary upon some Biblical matter that the press of his parish duties had kept him from. Perchance, did he go rest he might take up his pen to it again.

To their most extreme relief Dalgleish had finally returned after a stay of some duration in Belfast, wearing a black armband and looking sombre, but buckled down most resolute to his tasks at the ironworks. Cooper had shown well enough, but still needed somewhat of bringing on. ’Twas a pity, though, thought Eliza, that Dalgleish’s grandfather’s prolonged deathbed throes had meant that by the time of his return Lavinia Abbott had returned to her schoolroom duties after a stay of several weeks with her brother.

And there had been the matter of the coke-works — but indeed, Gaskell was a fine manager, and she came about to ponder whether that matter of that batch of very inferior coke had been somewhat of a message, seeing that it had led them to observe how matters went under young Birling and to purchase the concern to bring it under their own hand. Gaskell had not said anything in so many words against young Birling, but —

Eliza sighed. Well, Jos’, my love, I will go convoke with Williams about packing — I daresay I should take her with me, for I may have occasion to make visits to our acquaintance in Town, quite aside from needing to demonstrate my consequence to Old Lady Wallace.

Meanwhile I shall be about the hiring of a carriage to convey you thence. He glanced out of the window. ’Tis not the most convenable time of year for travel, alas, but we have not yet had snow, the roads should be passable.