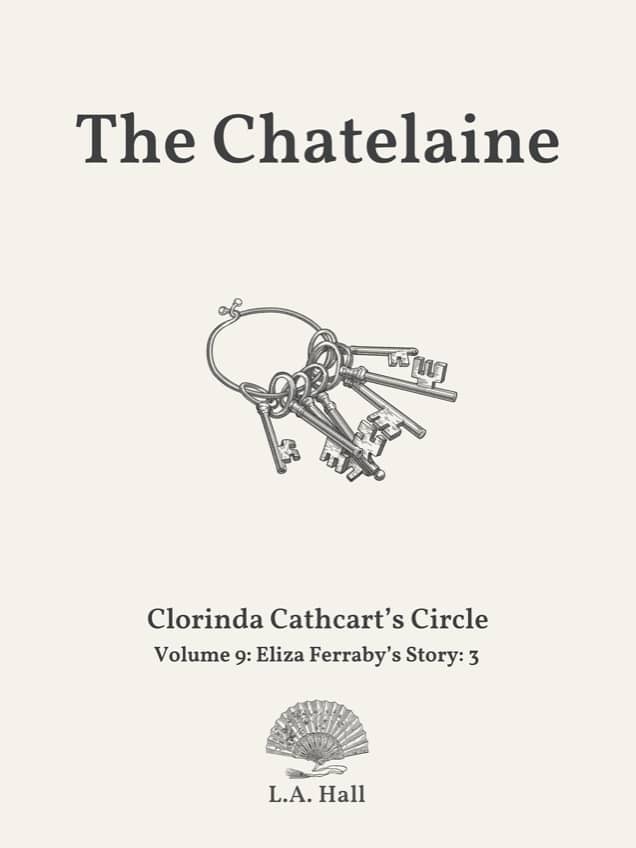 There is little doubt that the obsequious voters of Tapperbridge will ratify the Duke of Mulcaster’s choice and elect Josiah Ferraby a Member of Parliament, but the formalities must be observed in proper order. This new departure for the Ferrabys will bring about great changes in their lives. A move to Town; Eliza taking charge of the oversight of domestic affairs of Raxdell House when they go to reside in the East Wing; making new acquaintance and finding that relationships with old friends and family are changing. But they still have the love and contrivances of their treasured third, Clorinda, Dowager Marchioness of Bexbury, becoming ever more one of the family.

You might like to read the Chronology & Reading Order for these books & also the notes for this book: The Chatelaine: Allusions and References. Or view all books in the Clorinda Cathcart's Circle series.

Buy or Borrow The Chatelaine

Preparations for an election

One could not fret, thought Eliza Ferraby, when one had so many matters to get well under hand afore she and Josiah could depart to the Duke of Mulcaster’s seat at Qualling, so that Josiah might stand for election at the local borough of Tapperbridge, one of the members for which had but lately perished of galloping consumption. ’Twas not as though they were unused to absences, and the household was quite entirely in good ways that did not need her hand constantly on ’em. That fine governess Miss Netherne, she fancied, was entire capable of keeping the older children in order, and Patty’s rule over the nursery was exemplary.

There was some matter of ensuring that all was in order with Harry’s trunk, for had been bidden about to a deal of visits over the summer by various of his school-fellows. She had a little concern over Josh, that had looked somewhat stricken to discover that his playfellow Miss Linnet Whitterby had been carried off to Scarborough by her mother whilst building works were afoot at Whitterby Hall, and that there would be no jaunts there with her and her puppy and her pony and the wild creatures of the woods on the estate.

Josiah remarked that he would have done very ill by the ironworks could he not leave ’em in the care of Dalgleish with Cooper as his second, and sure Gaskell’s good management of the coke-works had, he fancied, been forged by the need to compensate for Henry Birling’s negligence. As for any matters of the improvements in the town, why, there was a fine set came on to understand the necessity and take them onwards.

And in between whiles, she would find him performing those exercizes for the voice commended by the actor Mr Jenkins, for doubted not that he would be obliged to make speeches at Tapperbridge. However like the electors of the borough were to concede to whatever candidate was put up by the Duke — the custom of Qualling being of such significance to their prosperity, as well as there being a traditional deference towards the Dukes of Mulcaster — he fancied he would still have to present himself a fellow of some capacity.

Their beloved third, Clorinda, Dowager Marchioness of Bexbury, gave a pretty snorting laugh when he said that, and asked, had either of ’em ever chanced to encounter Sir Vincent Pottleby, that was the other member for Tapperbridge? Sure Egbert Bartram, might he rest in peace, had been a dreadful diehard Tory, but he had some glimmerings of understanding: to call Pottleby a fool was to flatter his intellect.

They looked at their darling: in her previous life, before her brief marriage to the Marquess, when she had been one of the most renowned courtesans in Town, she had, they knew, been quite an intimate of the Old Duke’s set, that now looked with some horror upon his son and his reforming tendencies.

But, my loves, she went on, while I am sure the borough electors are not in particular used to considering the attainments of the fellows the Dukes put up for election, ’twould do no harm to ingratiate yourself and, behold, my darlings, I have a device. She waved a letter at them.

Eliza began to laugh. O, the loveliest of Clorindas has a contrivance! she spluttered. Their beloved was most exceeding noted among their circle for her contrivances.

Indeed so, said Clorinda with a demure look. I have writ to Mr MacDonald, that most fortunate is no longer a-spending all his time in discoursing of the classics with Lady Jane, and desired him to find out some matters of the history of Tapperbridge, that you may refer to, and that I am like to think they will find exceeding gratifying. And sure dear Sandy has found out a deal of matter, for may now be a sleepy market-town, but ’twas once of greater importance, and there were nearby battles during the Wars of Roses and also the Civil War, and there is a quaint antient market cross, and some fellow burnt for heresy by Bloody Mary, and a guildhall —

They looked at her very doating.

Entirely the thing! declared Josiah. Talk of their fine traditions, &C. I am entirely grateful to you, our treasure, and to Mr MacDonald.

Why, said Clorinda, with a sly dimpling smile, I fancy he feels he owes me a favour —

They looked at her and said, no doubt it was one of those secrets that were not her own to disclose.

Entirely so! she said. And, talking of favours, when I return to Town, that alas I must be about shortly once you are off to Qualling —

I am sure, said Eliza, that the girls will wail and protest and cry o, why may not Aunty Clorinda stay? —

Why, indeed ’twould be exceeding agreeable, said Clorinda, with a little wistfulness in her expression, but I fancy ’twould look somewhat particular and cause remark. No, indeed, I must be about returning to Town, but once I am there, may go keep an eye on how matters go at Raxdell House at setting matters in order for your moving into the east wing, and the general household improvements —

They both looked at her just a little sceptical.

— and I shall take Hector, and mayhap Dorcas, that will be able to pronounce upon the properness of the proceedings, and whether all is being done according to those good practices we should expect.

Of course their clever darling would.

But here came tumbling into the room the babies of the household — no longer such babies, Quintus a boy nigh on ready for his breeching, and Flora a boisterous and capricious little madam of two years and some months, both of them crying tiger!

Josiah laughed and said that when they had a fine tiger a-visiting, why, bears might go whistle, and sat back in his chair as Clorinda got down upon the floor and growled tiger-wise and pawed the air and chased the squealing infants around until she caught ’em and pretended to devour ’em, to their great delight.

Eliza looked on somewhat tearful — how Clorinda loved their naughty golden-curled dumpling Flora, how much it hurt her own heart that Clorinda must spend so much time separated from her beloved daughter. However much one might see the very good reasons why she had given her to them to bring up with her sisters and brothers, one could see that it was a constant pang. But were they to reside in London for a substantial portion of year, surely that would make things a little easier? Clorinda would be a frequent visitor at Raxdell House, it must be so, and the girls might go call upon her at her pretty little house near the Park, there would be opportunity for all kinds of jaunts and excursions —

Flora jumped up and marched to stand in front of her Papa, demanding, Bear!

Josiah laughed, and got down upon the floor growling.

Oh, would there be the same time for these fine family romps, in this new life that now seemed so very likely to come about?

Soon enough, and after some tearful renewal of those private vows ’twixt the three of them, they were obliged to go their separate ways, Clorinda back to Town, and Eliza and Josiah to Qualling…