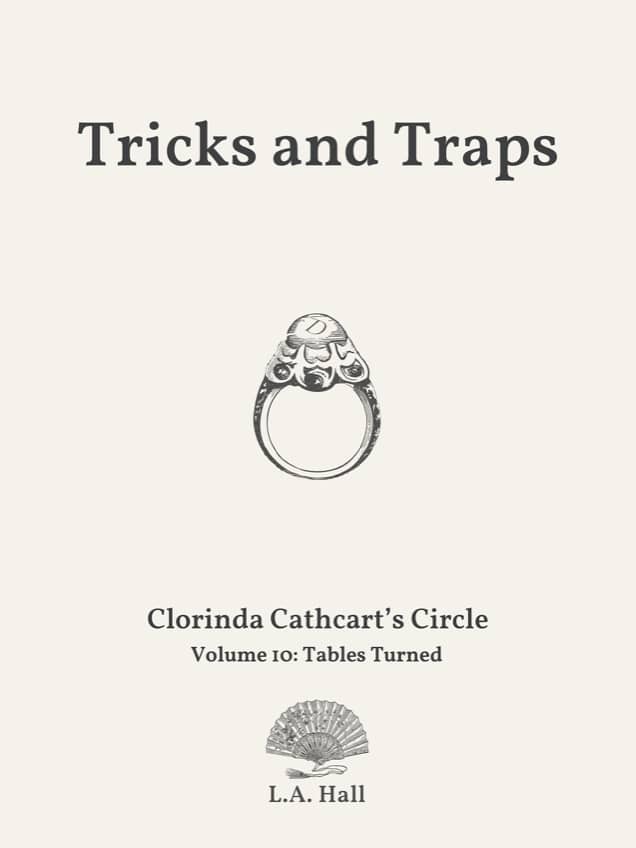 The former Bet Bloggs has been given a new identity and a new life; but an old acquaintance thinks he recognises the young woman supposed dead. Alexander MacDonald, visiting Cambridge, discovers a young friend has fallen victim to a set of rogues. Other members of their circle find that unexpected changes taking place in their lives. Clorinda, Lady Bexbury, welcomes to Town the son of her dear old friend, gamester and one-time fellow-courtesan Abby Gowing, now married and living in Australia.

You might like to read the Chronology & Reading Order for these books & also the notes for this book: Tricks and Traps: Allusions and References. Or view all books in the Clorinda Cathcart's Circle series.

Buy or Borrow Tricks and Traps

La, my dear, said Clorinda, Dowager Marchioness of Bexbury, as they sat at the breakfast table, to her dear friend Mr Alexander MacDonald, MA, philosopher and critic, here is a letter from dear Marcello with a fine budget of news from Naples — there is a well-cyphered enclosure of the more political matter for you, but he conveys also a deal of gossip from those parts. And who do you suppose goes linger there at present?

I have no notion, said Sandy, but I fancy that you are about to tell me.

Why, Basil Linsleigh — Sandy groaned — well may you groan, for according to Marcello, the wretch goes speak somewhat scurrilous about various matters in Town Society, and o, the dear creature, writes that although ’tis a deal of a while since has took up his stiletto himself, for is a sober agrarian reformer —

They both spluttered a little at this, for Marcello Traversini might not wield a stiletto any more, but the output of a very savage pen concerning the politics of the peninsula emerged from the secret printing press at the Villa Bexburi under the capable hands of his lover Alf White.

— would make an exception in this case.  Or mayhap might persuade one to take the fellow up the volcano and bring about an unhappy accident.

’Tis exceeding obliging of him, Sandy agreed. One did have some reservations as to whether Linsleigh would really make that arduous pilgrimage to Greece — And of course, one must consider that the peasant youths about Naples are not only exceeding handsome but prepared to be exceeding accommodating to Milords Inglesi for suitable remuneration. Mayhap he even finds inspiration to his brush —

But even so, he continued, one cannot like that he goes tittle-tattle thus.

Quite so, and I will go mention the matter to dear Sir Vernon, so that he may covertly apprize the Embassy that Mr Linsleigh is a fugitive from justice — or at the very least, levanted very prompt lest he be mixed up in a very nasty case of illicit dealings in the slave-trade, and perchance suggest that they put it to him that he would be well advized to continue upon his journey. But I hope dear Julia is keeping well secluded — though I fancy she is still in such condition that she would not be going about in Society anyway — o, mother and child doing exceeding well, and Marcello writes that Alf goes doat upon the babe in quite grandfatherly fashion — and we must suppose that Linsleigh is not upon calling terms at the villa.

Sandy looked for a moment dourly Calvinistical, removed his spectacles, polished them, replaced them, and said, sure ’twas some while since had seen Marcello, but did he still have that romantic banditti look, fancied might appeal to Linsleigh’s artistic instincts, the scoundrel.

Hah! did he make any such approach I fancy Marcello would commence upon describing how he has improved the milk-yield of goats very remarkable or some such. But while we talk of letters from friends afar, do you hear from Paris?

Sandy shook his head. We are in agreement that ’twould be imprudent to send letters — ’tis tiresome but sensible, alas — but he does write to Thomasina, because ’tis material to the business of Mamzelle Bridgette, and Thomasina tells Sophy, and Sophy goes tell me that Maurice writes that he is entire well and maintaining his consequence afore the Parisians and gaining some thoughts upon the new fashions.

Well, that is agreeable to hear.

Sandy sighed a little and said, though there were doubtless matters he would not communicate to Thomasina.

No — any more than I shall be disporting myself with some Cambridge don during this jaunt to the Fens I make shortly. I meant, was there any trouble of such kind that he would not communicate to a young woman of her years.

Clorinda raised her eyebrows a little. ’Sina is not some sheltered maiden, she remarked.

I daresay not, but even so —

Talking of sheltered maidens, although they are quite the reverse and indeed speak very much against the entire notion that maidens should be sheltered, do you go visit Yeomans afore you jaunt off to Cambridge?

Sandy smiled very doatingly and said, why, ’twas some considerable while since had been to see Miranda, and would wish to converse in particular with Hannah, for he fancied that this intelligence she had uncovered about the Sorcerer Earl would have put the dons in an uproar — had been corresponding with Newton the while he was about conjuring angels and demons &C at Monks Garrowby.

He rose to his feet and said, had a notion to be about it today — and what was Clorinda about?

O, undertaking some correspondence, and a-writing on my latest novel, and this afternoon I have Miss Hacker coming to call —

Matt gives me excellent report of her.

So he does! I wish to ascertain does she do the like of him, and is she comfortable in Celeste’s lodging-house, &C. ’Tis all very well going be a fairy godmother but one does not hear that they go see how Cinderella does at being a princess or so after they wave their wand to effect a transformation.

Sandy smiled at her fondly, asked whether she had any messages for any at Yeomans, and departed.

Clorinda smiled a little wistfully — sure a little jaunt to Yeomans would be agreeable, on such a fine bright autumn day! — but rang for the table to be cleared and went to her desk.

O, indeed it was pleasing that dear Sandy came about to love again. Sure the devastating premature death of Milord had struck Clorinda herself only a little less than the loss of her own best darlings, Josiah and Eliza Ferraby, they had been friends for so very long and through such escapades — had put her in the way of becoming Lady Bexbury through her marriage to his old friend the invalid Marquess — but the long devotion between Lord Raxdell and his Scottish secretary had been a rare and lovely thing in a world so viciously harsh on men like them. She had been most greatly concerned for him during those first months of loss.

But one could only approve of this new liaison. Sure ’twas somewhat unexpected — had never supposed, desiring Sandy to look into some trouble that Maurice was having at Mamzelle Bridgette’s, that that austere philosophical fellow would find himself tumbling into a state of quite the greatest affection for a dusky little effeminate man-modiste, with a most cutting sarcastic tongue and not entirely abandoned childhood acquaintance in the criminal connexions of Seven Dials. Though now became a very competent businessman and well-respected among his family circles.

No, that came about entire satisfactory. And ‘twas also entire satisfactory that dear Belinda, widow of the late spurious Marquess of Bexbury that she had left well before he succeeded to that title, now came live in the fine basement apartment here, so that she might walk out into the mews without stairs to trouble her lame leg. And had a most thriving connexion in the matter of horse-doctoring and other equestrian business, from her years as business partner to Captain Penkarding and her training at her father’s side.

Was also very agreeable indeed that young Thomas Thorne came visit what he termed the Old Country from the antipodes, to undertake various commissions on behalf of his parents’ fine humanitarian endeavours for the convicts — and, more recently, for the benefit of the aboriginal population — and to bring back various matters of scientific specimens and reports &C. Had also brought what was yet dearer to Clorinda’s heart, a deal of fine news and gossip concerning her dearest Abby and her excellent spouse, that most unusual clergyman Mr Thorne, and their companions in their work, the Carters — sure Ellie Carter must have changed a very great deal since Clorinda had first met her as an oppressed governess, sister to the Ferrabys’ dear Lucy Netherne! And the Atkins, reunited after his transportation for agitation and forming a combination.

As for matters coming about satisfactory — here was dear Sir Vernon, waxing most effusive about the talents of Lady Trembourne as an intelligencer about the spaws of the continent. Who would have supposed that that lady — the Unfair Rosamund — had but needed suitable employment to go flourish? Clorinda smiled secretly to herself.

Her eyes suddenly filled with tears. O, but she wanted Eliza, mocking her as her dearest contriver, and minding her to be careful in pulling her puppet strings. And their dearest Grand Turk, Josiah.

Well, here’s a foolish Clorinda, she told herself, giving herself a shake, as your dearest wild girl and your beloved Grand Turk would have been the first to tell you.